← Slumdog Tourism
Do You Smell That? →

This word you keep using…

There was an article in Friday’s Wall Street Journal focusing on the instances where playing a stripper or prostitute has garnered Oscar nominations or wins for the actress in those roles. 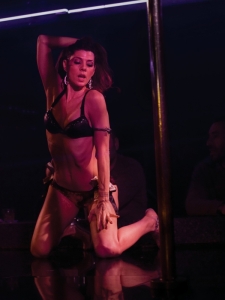 The latest actress to earn such a nomination is Marisa Tomei in The Wrestler.

The piece talks about how the prostitute/stripper role is a kind of tried-and-true archetype, (and one could argue tired-and-true) the kind of part in which an actress might be able to reveal a kind of dichotomy of sorts, the good and the bad rolled into one, the diamond in the rough of an essentially flawed character. It’s a character we’ve seen countless times, and I think the article does a good job of covering Hollywood’s fixation on this kind of female role, though it doesn’t really touch on the kind of inherent misogyny that films like Pretty Woman convey. (I mean, the hooker with the heart of gold is SUCH a fantasy; more often a fantasy than a reality, I would assume. I know this is the point of Pretty Woman. It’s escapist popcorn fare, and it doesn’t claim to be anything that it’s not, provided, of course, that you don’t count Julia’s Oscar nod. But I imagine you will find that kind of lovable whore probably as often as you will find a street walker who looks like Julia Roberts.) I just worry sometimes that these films kind of perpetuate the fantasy and thus the misogyny.

My favorite part of the article is a quote from Ms.Tomei, who says of her research at strip clubs before filming, “My aim in the film was to honor the women I met and to represent them in a meaningful way.” Honor? Really? I don’t mean to seem callous, or anything, but it’s not like these ladies are heroes or anything. They’re not saving lives or helping feed the minds of the next generation. They’re working on poles and jiggling their gear. I’m not saying their lives aren’t hard, but I just don’t think honor is something they’re too worried about.

But I wish Ms. Tomei luck tonight at the Oscars. I do think she’s a fine actress.

And can I just say something about Sean Penn as Harvey Milk? Okay — I knew the Harvey Milk story really well going into the theater that night. I had seen the documentary The Times of Harvey Milk years and years ago when it was playing in the theater. So I had no surprises. But I didn’t think Sean Penn was all that. Really. If anything, I thought at times that he played Milk kind of close to the character he played in I Am Sam. Sometimes he played it a little too gay, on the brink of stereotype even. And maybe Milk was kind of like that, but what I am saying is that it was no big stretch for Penn, who is also a fine actor and fine here, but not his best.

Hollywood always makes like these “gay-centered” films are so courageous, but I don’t really think so. How is it courageous for Sean Penn, or Jake Gyllenhall or Heath Ledger to play homosexuals? If Hollywood were truly courageous, it might actually cast a gay actor in a gay part once in a while. I’m sorry, but that’s what I think, and I said it. You’re telling me they can’t find any gay actors? Or gay actors with big enough names for the marquee? Please. I think they just don’t give people credit for being able to watch an actor that they know is gay play a gay part. It’s much easier for John and Jane Q. Cineplex to think, “Oh, it’s okay to see Sean Penn kiss a man because really, he’s not like that. Isn’t he a great actor?”

Frankly, I thought Clint Eastwood was better in Gran Torino. I even thought Richard Jenkins was better in The Visitor. (Which is a great movie. You should see that.) But Sean Penn will probably come away with the award tonight not only because he’s Sean Penn, but also because voting for him would be a statement against Prop 8. (Prop 8, by the way is abhorrent. It should be repealed, but it has nothing to do with Penn’s performance.)

I’ll tell you what I care about — tonight Manfrengensen and I had a sitter and there was NOTHING at the movies. Medea Goes to Jail…um, I don’t think so. (Can I just ask — why do the

plots of so many films aimed at African American audiences involve men dressing as women or men dressing in fat suits or both? Is this something that plays well time and again with those audiences? These films must do well right?) Shopaholic? Not wasting the cash. He’s Just Not That Into You? Not into that. Crap, crap, crap. We went bowling instead, which was fun, and the place was packed. I threw rocks in the first game, but petered out in the second, which is my usual pattern when keggling.

2 Comments on “This word you keep using…”

Leave a Reply to Betty and Boo's Mommy Cancel reply