One of My Ghosts

I thought I saw Jim again the other day. I hadn’t seen him in a while, or I should say, his apparition, since he’s been dead for almost five years. It’s weird how I miss that guy. It’s not like I’d seen him five times in the decade before his death. But I did love him. And even now, more than twenty years after we were inseparable, I still laugh at things he said.

I don’t even know how we got to be friends. I met him by accident, after dialing his number, which differed by one digit from my friend Tim’s, in error. We had a laugh then, especially since his mom had answered and mistook my request for “Tim” as one for “Jim,”  and he said that I should look for him the next day. He was visiting my school in some kind of exchange program. I went to an all-girls school, and he went to the affiliated all-boys one.

After that, I guess we ran into each other through the theater exchange program. I worked the stage crew for a few shows at his school, and he was either onstage or in the audience. I didn’t like him at first. He was pushy. He would talk everyone into enacting whatever crazy idea he had in his head. He was infuriating. One time he talked me into taking him for a quick run to McDonalds. It was spring, and I had the top down on my brick-red 1969 Buick Skylark convertible. I can still see him laughing in the wind, this big six-foot-three future queen with his mouth full of Quarter Pounder with Cheese. He got shredded lettuce all over my white leather front seat. Oh, never again with that guy, I thought.

But he drew me in. I don’t know how or why. I mean why had he befriended me? He used to call me all the time. He brought me to parties with his basketball team. Was it because I had a car, or did I amuse him as much as he did me? He definitely made me laugh. And he would do crazy stuff. He’d get you to pull stunts with him. I won’t bore you with my crazy high school hi-jinx, but I will tell you that we had lots of fun. 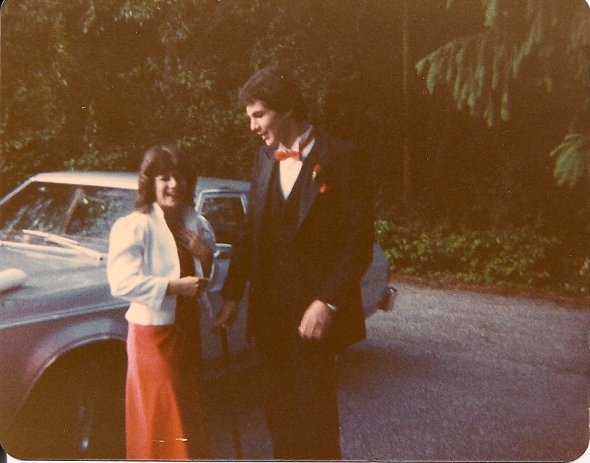 Jim and I before my senior prom. He taught me to swing dance for the event. Good heavens, is that a decorative cane in his hand? I look at this picture, more than twenty-five years later, and the expression on Jim's face tells me all I need to know about the way he felt for me.

It wasn’t that he was interested in me. First of all, he was gay, though he didn’t really let that freak flag fly until college. He was always trying to hook me up with his basketball friends. But at those parties, was I his beard?

I had a job shelving books at the public library during my senior year of high school. His house was between mine and work, and I would often stop there on my way. More often than not, I wouldn’t want to leave, and so would be late for my shift. In February, I came down with a serious case of the Senior Blahs. I was down with no idea why. I stopped by his house on the way to work, and his mother let me into his room, where he was shirtless, still undecided about the day’s wardrobe. He tried so hard to snap me out of my funk.  I just kept saying that I “felt…blah.” Then he did the oddest thing. While we were talking, he popped some of his Valentine’s chocolate into his mouth, nonchalantly licking the melted brown goop out onto his hand and spreading it all over his face until all that was left were the whites of his eyes like a performer in a minstrel show. That alone succeeded in making me laugh, but he pushed it further –“Kiss me,” he mock-pleaded, pulling me toward his reaching lips with those All-American Basketball arms. We ended up in hysterical fits of laughter on the floor. Then I left, buoyed enough emotionally to take on the dull-as-tombs of the library.

We both went off to colleges. I visited him a few times at his, and we kept in touch, and then we didn’t. After a year or so, I dropped out, took a semester off, before re-enrolling at state college. I was stunned to see him standing in the bookstore my first day. Turned out he’d also dropped out of school, abandoned his basketball scholarship, and taken some time off before returning.

And again, we picked up, right where we’d left off! He found out I was living with these strangers in a house off campus. He, of course, was in a dorm. “Do you have a tub?” he asked. And the next afternoon, he was soaking in it. We were inseparable after that, back in our old routines, he my ringleader, and I (I would hope) his touchstone. The following fall, we moved into a townhouse together.

He was sick with a cold for a few days that first semester off-campus. I remember him calling his English Lit prof, Fleda Rumson to get his reading assignment for the next class. She rattled off a number of pages on which he could find the poems they’d be discussing, “225, 229, 237, 248, 256, etc.” After about five more page numbers in the list he stopped her. “Fleda, honey,” he quipped, “are these haiku?” Dr. Rumson was unfazed and continued with the litany of homework pages. 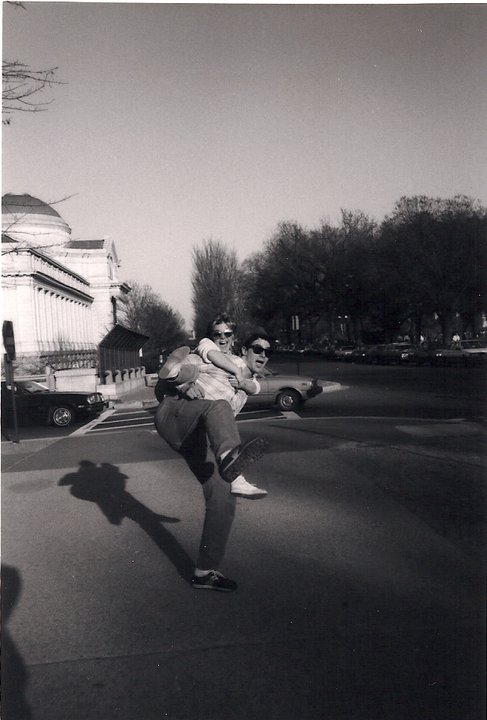 Living together though, eventually undid us. We were both young, and though fabulous, we both had holes on the inside. We would go for periods when we wouldn’t really communicate, let the other’s little quirks (the ones you wouldn’t see unless you lived with a person) go unaddressed until the hard feelings would erupt with way too much drama.

After one fight, where he’d accused me of not dealing with things the way I hadn’t dealt with the death of my mother (and I HATED him for saying that – oh I thought that was a low-blow – but all these years later, I think, man, he had me pegged) I stormed out. He was upset and went to his daily AA meeting. He was the first one to share, and he told the whole story about how he and the girl he lived with had this knock-down-drag-out, and how she had left, slamming the door behind her for emphasis.

It turned out that Warren Zevon was playing a show in town that night, and Zevon, an AA member himself, had come to the same meeting. After Jim had unloaded his story, Zevon offered him words of advice. “Let her go,” he said. “Tomorrow something beautiful’ll be knocking on your door.”

Oh, we’d laughed at that.

We made up of course, talked things out, but the problems returned, and eventually things escalated. We couldn’t live together. It ruined our friendship, and things were never the same again. We loved each other. And we saw each other after he’d moved out. We were always glad to be in each other’s company, but we were never inseparable again.

He ended up traveling. Chasing the fabulous life that he deserved. I’d hear through channels that he was living in D.C., or New York, or London. At one point I heard that he was a member of Madonna’s entourage, and knowing him as I did, I believed it. Eventually he settled in San Francisco. And then, about five years ago, I heard he was sick. Non-Hodgkin’s Lymphoma. So I tracked him down by phone right away. And it was like we’d only been out of touch for a week. We talked for hours. About high school, about living together, our lives since. We talked about his cancer and the things he’d been through with it, like the nightmare of  bone-marrow transplant.

One of the biggest laughs we had during that conversation was about the time his mother, who is a devout Catholic, had hosted a wandering statue of the Virgin Mary while we were in high school. She’d put it up in a shrine in their living room, so that when you entered the house, you walked right into it. It was like four feet tall, lit up from the huge windows behind it so that it looked ethereal. She surrounded it with flowers and candles. A parade of the devoted came by to worship at its feet before it moved on to the next location. At the time, we were young and stupid. We thought it was kind of goofy, kind of funny. We had no use for or experience with the strength of true devotion. Twenty years later, we may have been slightly wiser, but we still laughed.

And then, he sighed, really only half-joking, “Yeah…I could sure use a shrine like that now.”

He was planning to visit next month, before which he had to have one more set of tests done, to make sure the cancer was in remission. He couldn’t wait to see me, he said, and meet my kids. He’d call me in a month when he was in town.

I set out immediately, to make him a new shrine. I found a good statue of the Virgin Mary, albeit significantly smaller, on eBay and fashioned a shoebox diorama of his mother’s living room circa 1982, shipping it to his California address. The next month passed, and I didn’t hear from him. My father called one day in October, to ask if I’d seen Jim’s obituary in the paper. And that was how I heard the news. After the funeral, his parents told me about opening my package during one of Jim’s last few weeks, and how he had laughed and laughed from his sickbed.

I ran into Jim’s mom a few weeks ago. It was so good to see her. To talk to someone who understands how you can see the dead in public, only to get closer and realize the person’s not who you hoped they’d be. I wonder if Jim knew how much he would be missed. How much I would miss him. How even to today, I can’t see the word “haiku” without thinking of him and smiling. 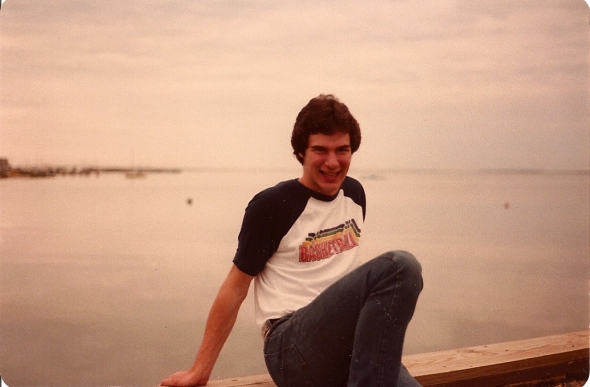 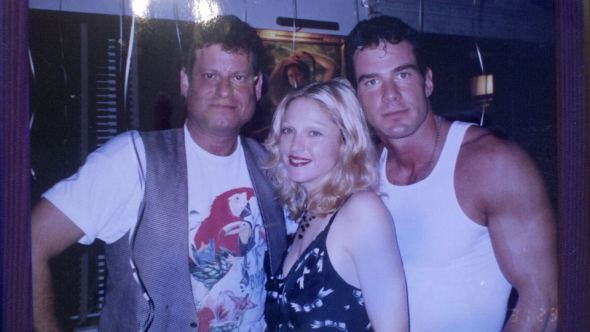 3 Comments on “One of My Ghosts”