Having moved recently, I came across a photo of myself with my friends in college. I’m not the kind of person who has chronicled her life much in photographs. There have been periods, certainly, that I have tried to capture, but for the most part, there are some gaps in documentation that I was in certain places at certain times. And even then, photos of myself are rare, like sightings of the Sasquatch. Oh, there I am. I guess it’s because I’m usually the one with the camera, at least, these days, when we mark certain moments in our family life, but also, I don’t really consider myself that photogenic.

I’m not exaggerating when I say that. I once worked for a newspaper, which decided to do a feature section on the people who worked there. A photo of me appeared in

the section that Manfrengensen claimed made me look like “Mickey Rooney in Breakfast at Tiffany’s,” which most people would agree, is not a good thing. I just got my picture taken yesterday for my driver’s license. Now, in my defense, the DMV woman told me that I was not allowed to smile (not that smiling would have made a difference, because it’s what made me look like Mickey Rooney) because computer scans of faces can’t recognize those with smiles. (So, if you do commit any crimes, be sure to smile for the security camera if you want to foil law enforcement.) Anyway…I got the license. It looks like I just escaped from Alcatraz, and I am ready and willing to kick anyone’s ass.

Back to my photo find: 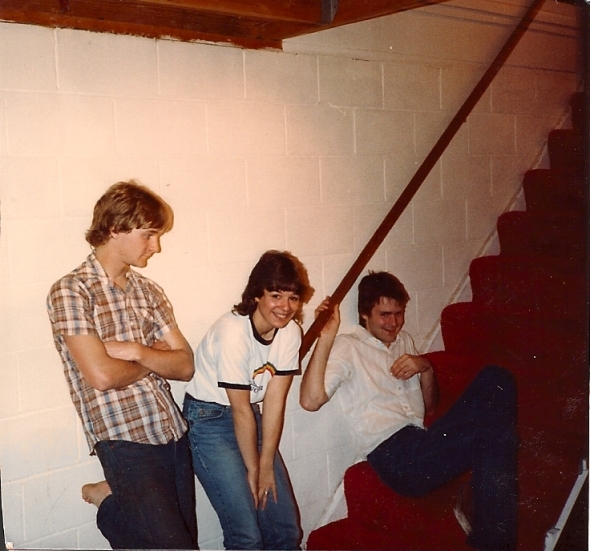 That’s me in the middle, somewhere between 18 and 19, with my college boyfriend on the left, and another friend on the right. Who was I then? I mean, I look back, and I wonder, what the hell was I thinking? And I’m not even talking about that pseudo-mullet I have going on. Nothing had happened to me yet…sure I had lost my mom, but all the great stuff that I’ve experienced, marriage, giving birth, travelling to Europe had yet to come. I’d never smelled a baby’s head or worked on a computer that showed anything but green digits. I’d never swum in the Carribean or walked the streets of Paris. Aside from my mother, at that point nothing too traumatizing had happened either. I had yet to be robbed at gunpoint; I had yet to lose a job. So I wonder, why did I think I knew it all then? And even with that, I was so lost; so willing to bend to belong. So open, and yet totally with blinders.

I wanted to work for Rolling Stone then. I loved music. Those guys in the basement, I met them because they were in a band, and I interviewed them for a story about a gig they were playing on campus. Next thing I knew, I was with them all the time, and even though we were only together a short period and I haven’t seen them in almost 20 years, they are beloved to me. Of course we all keep in touch on the Facebook, but before its inception, we didn’t hear from each other for years. And yet, as I said, I still miss a handful of people in Indiana with all my heart.

I think about that girl in the photo and it makes me so sad. I don’t even know why. Is it because I am not her anymore, or is it because she breaks my heart? Don’t you see what’s coming Egghead? Why are you in such a rush? It’s all going to be good.

And even though I was so lost, these people took me in. Even though I was in the wrong place at the time, they helped me become who I am, and so they guided me to where I needed to be.