← John Stamos is hilarious
Life with a disorganized genius → 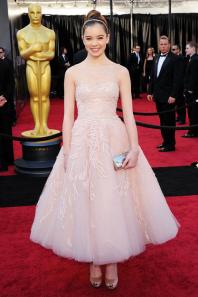 She considers herself a fashion diva, and I have no place to argue, though Manfrengensen often accuses her of ripping off Cindi Lauper’s sense of style. I thought it would be fun to watch the Oscar Red Carpet show with her, though we disagreed on a few things.

I loved Hailee Steinfeld’s Marchesa Oscar dress, thinking it was totally age-appropriate, and just stunning. The Princess, however, was not impressed. She didn’t hate it, but she wasn’t wild about it either.

She likes things a bit more frilly or sparkly. She thought Amy Adams’s dress was the bomb. I had to admit that Adams looked stunning in her sparkling purple (also big with The Princess) LWren Scott.

also no fan of Cate Blanchett’s Givenchy dress, which I thought was interesting.

But the dress she hated the most was Jennifer Hudson’s Versache number (never mind that the dress was the darling of most other Red Carpet fashion critics). 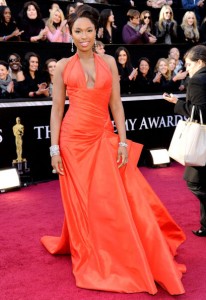 “No,” she said, looking up again from the iPod game she was playing to take another look, “too booby.”

Let’s hope that kind of fashion sense stays with her, at least through her teen years.

Anyway, not long after Hudson’s arrival The Princess lost interest, and we switched back to our regularly-scheduled programming. Spongebob was wearing his trademark brown shorts, white shirt and tie, and he was working that look like no one else can.