Here’s a thing about me: I never got Confirmed. So there, now you know my dirty little secret…or at least dirty little secret number 714, right up there with the fact that I don’t really know too much Shakespeare. In my defense, I had a really awful college experience with Shakespeare. The prof was quite persnickety, and it was one of those classes where it seemed like everyone else knew something I didn’t (which, incidentally, they did) and they all got it, and I didn’t, and with the way I

read, which is to say, quite slowly, there was no way I could ingest three or more plays a week, let alone plays by Shakespeare, which might as well have been written in a foreign language to my twenty-year-old self, because I had no idea what they were about. To this day, I can pretty much sum up Shakespeare thusly:

Romeo & Juliet: The one with Leonardo DiCaprio that Baz Luhrmann made famous. Rockin’ soundtrack. I mean, nothing goes together like Shakespeare and The Butthole Surfers. Am I right? Huh?

Richard III: The one in which Richard Dreyfus was starring in The Goodbye Girl. He was a king; he was gay, and he limped. (Richard III, I mean, not Dreyfus.)

Othello: The one with the black guy.

Hamlet: The one with Mel Gibson. Glenn Close played his mother. Were they kidding me? Oh, yeah, and it’s kind of like The Lion King.

Henry V: Can’t you see this is the last act of a desperate man? — We don’t care if it’s the first act of Henry V. We’re leaving! (Blazing Saddles)

Coriolanus: The new Ralph Fiennes movie, which he directed, by the way. God, I hope I am pronouncing it correctly. 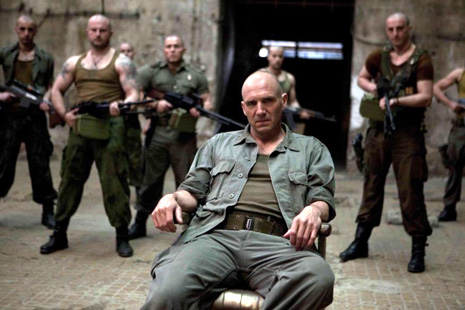 Plus I didn’t want to sit for three hours thrice a week for a summer seminar during a time in my life that was so troubled (long story short, my dad had just had a heart attack, and one of my good friends had hung himself from the bar in his closet that spring) that I hardly even went to class, and ended up just dropping out in July. (I eventually went back, changed my major to history and got the degree, which is pretty much the story of my life and brings me back to the Confirmation story. I mean, I complete things…eventually.) Maybe I will even get into Shakespeare someday. I do love Twelfth Night. That one I get, and it’s quite funny.

Anyway, a few weeks ago, in the weekly church bulletin, there was a notice that adults who had missed Confirmation could be confirmed during the Easter season. How convenient. As someone who has, in the last few years, come back into a faithful way, this would be a great opportunity to complete my Catholicism, make it whole. I had lied, of course, before we got married in the church, when they had asked me, “Have you been Confirmed?” I’m really uncomfortable with lying, but I’m also uncomfortable trying to sit through things like Catholic training classes, insurance seminars and root canal. For these three experiences, I have exactly equal enthusiasm.

But, for all rewards, some sacrifice must be endured, so I have been willing to give up my time to get Confirmed. It hasn’t been too bad. I have to go to the Deacon’s house once a week to talk about the sacraments. It wouldn’t be too bad at all, if weren’t for the other people I’m there with. Sorry, I hate to judge, but sometimes, you just have to make exceptions. I can’t help it. I’m human. They are this couple who are about to get married. She’s converting to Catholicism, and I just want to say two words to her. But I can’t say those two words to her, because those two words are, “Honey, run!” Run for your life. Don’t do it.

See, I’m sitting there every week at the Deacon’s dining room table, in a condo carved out of a centuries-old stone mill that looks like a church inside with its ornate archways and gilded lighting fixtures. There’s a crystal chandelier with fourteen bulbs and a multitude of cut-crystal teardrops that hangs over the table, which is covered by a dainty lace tablecloth. As the minutes tick away on a clock that chimes every quarter-hour in the same dulcet tones as the grandfather clock my grandparents had in their house, I sit there wondering how old the lace is. Did the Deacon and his wife get it as a wedding gift? Did Mrs. Deacon buy it on a trip to Ireland, perhaps? I think about how she has decorated their home. How she’s placed this lace on their table, how she’s arranged the Tiffany’s-blue-bordered china cups and saucers just so in the glass-fronted sideboard, and where is she at the moment anyway? (Last week I actually heard her answer the phone, but we have yet to see her.)

I know a lot of what the Deacon is telling us already. I went to 12 years of Catholic school, plus three years of Catholic pre-school and kindergarten. I went through Pre-Cana classes before we got married. I have had three children baptised in that same church, and two of them have had their first Communions and first Reconciliations there. I have worked for years as a Catholic school teacher, even teaching religion myself, which has required hours of Catechist training. The Deacon isn’t telling me a single thing I haven’t heard before. But he’s a sweet man, actually kind of funny, and I figure this is where I need to be to get where I need to go.

It’s all perfect, except for one thing: The oaf she’s marrying. He sits there, squirming in his chair, biting his nails and flicking bits of chewed epidermis onto the Deacon’s oriental carpet. He rolls his eyes. He grunts. He asks irrelevant questions about Vatican II and what the Protestants or Episcopalians do. I keep thinking about marriage and how it’s not all fun and excitement, how sometimes it’s just the two of you all night in front of the TV, and while you may certainly love that other person, sometimes the things they do drive you crazy. They make noise when they eat popcorn, or they sneeze too dramatically, or they talk when you’re trying to hear how David Caruso’s going to crack this case before the end of the hour.

But then I realize that I’m totally wrong. What do I know? They could be perfect for each other. And to prove the point, I offer this story: We’d been there almost an hour and a half, which after dealing with a day of work, and traffic, and for me, kids, was getting kind of late into the evening. Sure, I wanted to be in my pjs and bunny slippers listening to Manfrengensen munching on popcorn by the lights of the TV and his iPad, but I was making this sacrifice. I was willing to sit until the Deacon had finished saying what he had to say. He’d taken time to prepare this presentation, and I respected that.

The clock chimed 8:30, going through half of the full melody that it chimes on the hour. And she interrupted with the first words she had said all evening; the first words I had ever heard her say in fact. Her voice was shy, a little thin, youthful and reedy, “Excuse me,” she said, and the Deacon looked up hopefully from his Catechism book to her, as if expecting some kind of epiphany on her part. “We have to go,” she continued. ” There is a television show on at nine o’clock and we forgot to tape it, so we need to leave now.”

My chin nearly hit the lace on the table. So, what you’re basically saying is that God is great and all, love hearing about the god, but American Idol (or whatever it is) takes precedence? Those are some Twenty-first Century Cajones, know what I mean?

But the Deacon was sweet and released us for the night. Maybe there was something on that he wanted to watch as well.

Life is funny, isn’t it? It certainly seems to come up with the surprises. I don’t know about you, but I never ever expect what’s coming. It always throws me for a loop, like reading a McEwan novel, only with more laugh-out-loud absurdity. And I have to say, thank God for that.