I’ve been kind of stressed lately. I know that’s going to shock you, as I am sure I seem so together and easy going here. Ahem.

Anyway, the kids have been sick for a spell. I figured out today that between snow days and sick days, my kids have been home for six of the last ten, when they should have been in school.

But they are all on the mend, and the snow is melting. We had some good times sledding, even though Clooney was almost killed….Okay, it wasn’t my best moment in mothering, but you know, I have plenty of those. I’m a good mom. Just because I failed to stop my son from careening down a steep hill, doesn’t make me a bad mom. See here:

I don’t know…I figured he would know to roll out of the sled. So it hasn’t really snowed here since 2005, when he was two, and he’s never really been sledding. But I just figured he would roll out of the thing. Thankfully the folks driving on the street at the bottom of this hill were watching and driving carefully. Clooney came to a stop right in front of the bumper of an SUV, along with (briefly) my heart.

Thanks to whomever the patron saint of sledding might be.

Here’s the funny thing though: I’m such a dweeb. I was the only person on the hill that day wearing a hood. I don’t know what’s with people. They were all out there with their necks exposed in teen-degree weather. Not me — I’m bundled. I may be a dweeb, but I’m a warm one. Manfrengensen teases me that I look like Han Solo on Hoth in that get up. 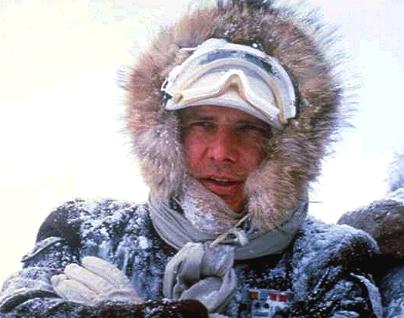 Almost as warm as the inside of a ton-ton.

But like I said, I was warm. We’d been sledding for like an hour, and they decided to do one more run, but I was finished and stayed at the bottom. Manfrengensen started to walk, and when he was like fifty or sixty feet from me, he turned back to me and yelled something that sounded like, “Blah, blah blah, tree.” My hearing’s not too good with the hood on. I kind of interpreted his words like a dog interprets those of a master. My head may even have been cocked to one side. “What?” I asked for clarification. And again, he said, “Blah, blah blah, tree.”

So, I figured he wanted me to wait by the big tree there, maybe take some pictures or video (see above as proof of what a great job I did at that). Turns out though (and I only found this after we’d nearly lost one of our young) he’d said, “Stand down here and make sure they don’t go into the street.”

Oh. That made more sense, I guess.

So, I sat in the corner with the dunce cap that night.

Then yesterday: The boys had another snow day, but The Princess had a dentist appointment, and we also had some errands to run. Because I wasn’t sure of the condition of the roads, I gave us some extra time to get there, planning to leave the house at 9:30. Things always happen though. Someone always has to go to the bathroom after they’re all bundled to go. I couldn’t find my gloves. I had my purse over my shoulder, along with a bag packed for the Y, figuring we would go there later in the morning.

So all that’s over my shoulder when one of them asked me to help him find his glove, which had been removed after sledding the night before and thrown into a massive pile of laundry in our galley of a laundry room. I had made some delicious coffee yesterday, and I had put some in a travel mug and worked all my chemical magic to get it just right. I set the cup on the washer, and bent down to look for the glove. But somehow, the stuff over my shoulder upset the coffee, and the thing went FLYING, landing totally upside down and commencing to empty onto the laundry room rug.

And I have to say that I am pretty proud of myself for not using the F word right then.

But then I stood up. I really don’t know what I did to that coffee cup, but somehow as it went down, it must have flown up and around, and when it did it sprayed EVERYTHING in the laundry room with sweet caramel-colored nectar. There was coffee on the window, the window pane, the window sill, the baseboards, the wall, the washer, the dryer. There was even coffee on both the inside and outside of the slightly-open door of the laundry chute. I’m talking total carnage.

So I cleaned that up and we made it to the dentist with seconds to spare. That went well. The boys were good waiting, and The Princess handled her first cleaning like a sparkly-toothed pro. We left to head for my Jenny Craig appointment, again with minutes to spare and got about five hundred yards out of the parking lot when the dentist’s receptionist called to ask if we might have left a case full of DS games (and I figured out there were about $300-worth of games in that case) behind. Yes we had. If Edison’s head were not attached, I think you know what might happen.

Later, more milk was spilled at home in a dramatic fashion that covered most of the table and kitchen chairs. That was when I think I came closest to totally losing it. Especially when Clooney told me that I had “missed a spot” cleaning it up. Then I kind of went Incredible Hulk for a minute.

So here’s the good:

At Jenny Craig yesterday, I had dropped another 2+ pounds, taking me over the 30-pound mark. Technically speaking, I have less than five more pounds to lose.

Today I went to Macy’s for the bra sale they are having (buy two, get one free) and I got four bras for the price of the one I was wearing from the place I went to in Unmentionables (the everyday one.) But in that bra’s defense, I want to tell you 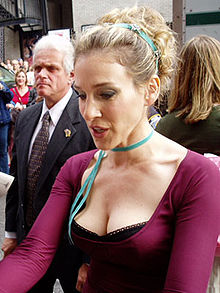 that I went to Ann Taylor after that and tried on a T-shirt that made me think “My God, that looks like a FABULOUS rack! I must buy this shirt.” I freaking looked like I had Sarah-Jessica-Parker boobs, and (as you may or may not be aware) those are not to be sneezed at. Unfortunately, my belly button, which was shrouded in what’s left of the flab (damn baby weight!) and visibly outlined by the white spandex-cotton blend, spoke the sense to me through the clingly fabric to counsel against it. It said, quite frankly, “Sister, you are no SJP. We’ll talk again when you lose those five.”

BUT despite the talking belly button incident, I tried on these jeans today that I had tried on more than a month ago. They were a little tight back then, and gave me a bit of muffin-top (and I don’t like muffin-top, at least not on me). A month ago, I had left them at the store. Today they fit great! I almost cried. Nice to go clothes shopping and like the way I look and feel.

Overall though, I can’t believe it’s only Wednesday. This morning I loaded up the crock pot with chicken and ingredients to make some kind of mushroom chicken thing. When I got back from the mall five hours later, I checked on it: forgot to plug it in. Doh!

It’s time to start getting healthy.  Not that I am fat, or have a bad body image, but in the last year, I have put on almost 20 pounds, and the extra weight is affecting my health.  It’s not really image that bothers me, although I was left kind of withered when the Wii Fit told me I was what the boys pronounce as “obsees.”  I’m only a few points over on the BMI scale, but I don’t want to slide any further.

After seeing the doctor a month ago and finding out that my lab work was funky in the cholesterol and triglyceride departments, I decided to make some changes.  But change has been slow.  I’ve tried cutting certain things from my diet with little measurable success.  A few years ago, after The Princess was born, I did the South Beach Diet, which I was successful with. I think I lost about forty pounds.  But you know, the thought of going back on…it’s a hard diet.  There’s a lot of denial involved.  And life without carbs is a tortuous fate for me.  I mean, I hated feeling guilty about wanting a piece of toast for breakfast.

So, anyway, I decided to try Jenny Craig.  I had done Jenny Craig in the 1990’s to drop 20 pounds before my wedding, and had been very successful.  My dad and his wife got me into it, and they paid all the fees and for all the food I ate while I was on the program.  I think it’s going to go well, but I have to say — it’s expensive.  Like, eyes-pop-out-of-your-head-like-a-cartoon-character-when-you-get-the-bill expensive.  Gotta drop the weight fast because I don’t think I can afford to be on it for more than a few months…

I like the variety of the food and all.  And I like having the meals all planned out for me.  I will try to keep a little record here about my progress.

Some things I saw in my travels today:

Woman walking the halls of the hospital I visited who was wearing a Red Foxx t-shirt.  She was walking toward me, this big red T-shirt.  She was a big, tall lady. His face was printed on the shirt in white.  I thought to myself, “Is that? Is that Redd Foxx?”

Guy working the pharmacy counter who was wearing a pre-fixed tie like the ones I’ve bought for my boys.  You don’t tie it…it’s like this kind of zipper aparatus that tightens or loosens it.

Hey, I don’t know if you saw Mad Men this week, but it was a really good episode. Next week’s looks good as well.  Can’t wait!