So, I Just had “the talk” with Clooney, confirming his suspicions about the Easter Bunny and Santa. He took it much better than Edison, whose response a few years ago was the dramatic accusation, “You LIED to me!” before storming up to his room and slamming the door.

Clooney said that he had been “testing” his theory about Santa and the Easter Bunny for a while. This testing entailed not writing a letter to Santa, and not telling me what the Easter Bunny should bring in his basket. Overall, he took the news well, and before he went on his way, he said “Wow. You and Dad should really think about doing some professional acting because you guys are good. Dad keeps secrets better than that guy on the Bachelor .”

We don’t watch The Bachelor , so I’m not entirely sure what that means, or where he got that concept, but still, that kid makes me laugh. 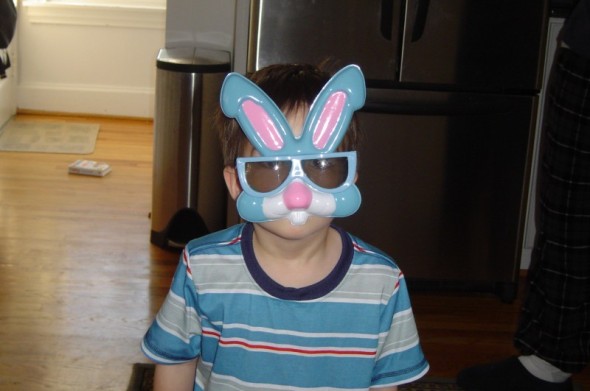 See if you can tell the differences between my two sons based on their letters to Santa. Incidentally, both were typed as Word documents.

I really wish that I could buy some LEGO stock. I think most of the LEGO things he wants are about $150 each.

I know that you’re busy and all, but I haven’t got a chance to give you my Christmas list!  I’m sorry, but fifth graders are busy with all of the projects that we do.  And also, if you can’t read my brother’s list, it’s OK, I can’t really read it either.  He needs some work on grammar.

OK, so now that that’s over, I want to tell you what I want.  No problem, right?  Good. Now, ever since I’ve seen Super Mario All-Stars, I’ve wanted it.  It comes with a Mario CD, with soundtracks from the Super Mario games, a Super Mario history book, and four Super Mario Games: all in one pack!  Amazing, right?

Now, this might be a big task but, could I PLEASE have the Lego Harry Potter Hogwarts castle?  It looks amazing, and when I read the book, I had no idea that it looks like it does!  It has staircases, ten minifigures, knights, and it’s the best school of wizardry and witchcraft, thank you very much.  The book’s the BEST!

The Lego Mindstorms NXT Robot is pretty cool, too.  I have ALWAYS wanted to engineer, so I want to get that.  I really like robotics, bridge making, and the way to use your brain.  It will also help me wit my next science unit project.

The Lego Quidditch Harry Potter set is pretty cool, too.  It contains minifigures, the Snitch, the Bludgers, and all of that other good stuff.  I would LOVE to compete against my brother looking for the Snitch!

Sonic Colors for the Nintendo DS or for the Wii would be fun to play, too!  It has amazing power-ups, and enemies that are fun to defeat with them.  Sonic returns again!  I played a demo of the DS version on mine, myself.

Harry Potter, years 1-4 for the DS and Wii is also fun.  As I have mentioned, I read the book.  I can probably be on the Quidditch team!  The magic begins when you stay at the Dursleys’ home, going through the reptile house to Hogwarts school. It looks like I’ll become a wizard!  Both my brother and I want games, Wii and DS.

Maybe Harry Potter, Year 4 would be a good book for the holidays, don’t you think?  Books are VERY fun to read, and this one is so long, it might take me all winter!  Harry Potter is very nice, exciting, and adventurous.  I hope you’ll give it to me for Christmas!

Harry Potter on DVD would be fun to watch, even seventeen times if I want to.  But, that would give me a headache.  Still, it’s a good movie.  I like the first two, but have only watched a little of the third.  Could you get me the first three, please?  I haven’t read the full third book yet, but I’ll watch it when I’m finished.

The Lego game Magma Monster would be fun, and so would Creationary.  I could play them with my family on Christmas morning. Anyhow, I would really like them, so could you please get them please?

P.S. My friends say you’re not real.  If you are real, send me a letter with my gifts to prove them wrong!

We’re going to see Santa later today. Even though I have kind of been shopping for gifts already, I feel like going to see Santa is really the “official start” of the holiday season.   The visit will be a bit of a haul. I’m actually driving to a mall that’s 20 miles away to avoid the creepy Santa at the mall that is closest. Let’s just say I’m opting for the least creepy Santa, and leave it at that.

Anyway, I got The Princess all dressed in her red-and-white-striped play dress and came down to the kitchen for breakfast.  Getting ready to make my coffee, I hit the iPod for a little morning shuffle.  The first song on deck turned out to be Springsteen’s “Santa Claus is Coming to Town.” Weird?  To give you an idea of how infrequently my iPod puts that song into the shuffle rotation: I didn’t recall that the song was even on my iPod.

So, you know I just finished The 19th Wife, right?  Well, the word apostasy was all over that book.  “Since Ann Eliza’s apostasy…Everyone knew of her apostasy…etc, etc.” It’s a word I don’t use often, so it kind of stuck in my head, and I played with it there, much like you might run your fingers over and over a smooth stone in your pocket.

Last weekend following a disasterous Notre Dame football game, and after stewing for more than an hour over the “incompetence” of the coaching, Manfrengensen said to me relatively out of the blue, “Do you know what the word apostasy means?”  And it just so happened that I did.

Oh, and I just thought of another coincidental thing: Edison took a test last Saturday to sort of bench-mark his intelligence, and it was like the SATs, with verbal and math parts and a break in between. Manfrengensen drove him, and right before Edison came out, Manfrengensen was reading a story about wind power in the Wall Street Journal or The Economist that he had brought along for his wait. The piece explored the power of gales and the challenges of harnessing them. Anyway, Edison came out of the verbal part for his break, and Manfrengensen asked him how it had gone. Edison said he thought that he did okay, though there was one word he had to guess at. It was the word gale.

Speaking of apostasy, Edison is beginning to have his doubts.  The other night he asked me if I was the one who really put all those presents under the tree.  So, I looked at him skeptically and asked, “Does that really sound like something I would do?”  He saw the foolishness of his inquiry then and admitted, “No, not really.”

It’s the last one for him, that’s fairly certain. I just want to enjoy his beautiful innocence for as long as it lasts.