This morning I read about the controversy surrounding GoDaddy pulling its Super Bowl ad because of a kerfuffle about puppy mills and animal cruelty. Which of course, is something we should all be concerned about, yes, yes. I hear you. But what bothers me about this, whether it’s actually true or just a GoDaddy-staged publicity stunt is that while you can get this kind of action for the rights and dignity of animals, you can’t really say the same thing about the rights and dignity of women. Seriously, just try complaining about the objectification of women in ads like the ones for 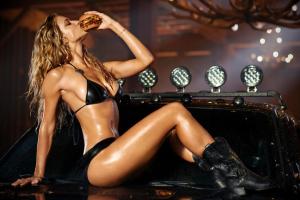 Greased, in a bikini. You don’t see them eating Big Macs or Whoppers like this, let me tell you. Plus, that position…hope someone is right off camera who knows the Heimlich maneuver.

Carl’s Jr. or any of the other myriad Super Bowl ads, or almost any ad (one of my favorites is the one where the guy is watching the game on his phone under the table because obviously it’s more interesting than anything his woman has to say from across it…but I digress…) for that matter, and you won’t hear anything about the ad being pulled for a reason like that. If anything, what you will hear is the sound of crickets chirping.

I could go on, but that ‘s not really the story I wanted to tell you. No, this is a story about parenting. A story about how I would like for my boys to grow up understanding that women are human beings, not slaves or sex objects,  and that the way women are portrayed in the media has an immediate effect on how men view them in the real world. And I made my point, in the car on the way to school this morning, by relating it to Congress’s recent refusal to pass the Paycheck Fairness Act and the fact that women in the United States of America on average earn seventy-eight cents for every dollar that a man earns, even if they are doing the same jobs with the same amount of experience. It’s 2015. The 21st century. The new year came and

everyone was bitching about how we weren’t getting the hoverboards that Back to the Future II had promised us. I’d just be happy if they gave us the 22 cents. I mean, can you imagine what would happen if people whined more about pay inequity than they do about the injustice of not getting hoverboards??

But again, I digress…I’m a stay-at-home mom. Basically, as I’ve said before, that means I am a cook, a laundress, a chauffeur, a judge, jury and jailor, janitor, a pet sitter, a nurse, a cop, a safety monitor, a teacher, a gardener, a comptroller, head of purchasing, a cruise-director, appointment secretary, and all-around shit-doer. So when I mentioned to my sons this problem of the pay gap, I was a bit incensed when the one in the back seat said, “Yeah, but you don’t work.”

That’s right. He said it. After asking me this morning where he might find his freshly laundered gym uniform, and then packing the lunch I had prepared for him into his backpack, this son of mine had the stones (though admittedly not the brains) to say to me, “But you don’t work.”

But the funny part was that he had said this as we were pulling into the parking lot of his school, and not a minute later, he realized that he had actually left his gym uniform back at home. “Can you bring it to me before 8:30?” he asked. (This was at 7:50, and I still had his brother to drop off at another school.)

The other day, The Princess was coloring a picture from The Nutcracker. It was a man in Chinese silk pajamas that she was coloring red with a big fat crayon.

They got into an argument, which, they naturally brought to me for judgement. My ruling was that Clooney was being sexist.

And I had to explain to him that sexist and sexiest are not the same thing at all. (And by the way, how does an eight-year-old even know what “sexiest” is??)

So, any way, speaking if sexist (not sexiest) I had been waiting a long time to be able to read the Madeline books to The Princess. At first she wasn’t into them, so we never really got through the story. Then the other night, I tried again, and we made it all the way through the first one. She liked it okay, but here’s the thing: Clooney loved

it. Not only did he love it, but the next night, after he had fallen asleep, and I went to tuck him in, the Madeline book was lying by his bed. He had read it again on his own.

It never occurred to me to feed the Madeline books to my son. Sexist, right? So I bought one of the sequels, Madeline’s Rescue, and when I read it to them, he laughed and laughed like the end was the funniest thing he’s ever heard. Last night, he finished reading Harry Potter and the Sorcerer’s Stone, which he’d been working on since right before Thanksgiving. And when I went to tuck him in, after he’d fallen asleep, I found Madeline’s Rescue on top of the Rowling.