The Mirrored World by Debra Dean

Debra Dean has written a wonderful historical novel, which I think, is even better than her first, The Madonnas of Leningrad, which I had trouble getting through. This one, The Mirrored Word, I could not put down, and read in about two days.

It tells the story of Russia’s St. Xenia, who lived during the reigns of Elizabeth, Paul III, and Catherine the Great. She has a normal childhood, though her father is killed 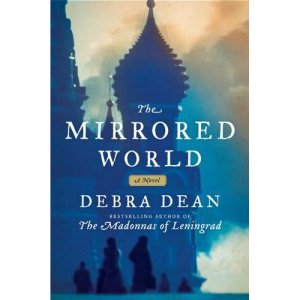 in war, which is when she comes to live with her cousin. The two bond closely, and are brought into the society of the Russian court. Xenia falls in love with one of the court’s musicians, and after a few tragic events, begins to slip away from the material world.

Dean does a wonderful job of walking the fine line between madness and holy inspiration, as Xenia leaves everything behind to live among the outcasts, with her cousin Dasha always looking out for her.

The novel was written in beautiful, etherial prose. It reminded me of a cross between Geraldine Brooks’ People of the Book and Sena Jeter Nasland’s Abundance, both of which were also amazing reads. I also liked that it was a look into a historical period that we don’t often see in Western literature, the Imperial Courts of 18th Century Russia.

I can’t say enough good things about this book, but I will say this: I have had a REALLY hard time finding something good to read in this year of 50 Shades and Hunger Games, something interesting, with compelling characters and plot, that felt nourishing to my brain as well. The Mirrored World completely took me there, and away to another place and time.