…So many books….So little time….I can’t finish anything if it doesn’t pull me in….

I have been having trouble getting into anything for months.  The last book I read all the way through was Marisa de los Santos’ Belong to Me, which was good, but uneven.  Her writing is at times spot on, and the poet really comes out of her with some beautiful imagery.  There were scenes about a woman who had cancer that made me break down and cry. Other times, though she’s just okay, and downright cliche, like the brother character that I could see played in a movie by Keanu Reeves circa 1990. Still, the book was worth finishing and generally enjoyable.

But since finishing that, I haven’t been able to get into anything.  I started Jennifer Weiner’s new book, Certain Girls.  Again, the writing is good, but overall I found the central plot elements not as engrossing as her previous works.  I put it down about a third of the way through.  I hope to go back to it, but in general, it hasn’t called to me.  I really have liked her previous work too.  This one is a sequel to Good in Bed, which I loved.  One thing I find kind of annoying though is how Weiner is always hitting us over the head with how ugly Cannie is.  We get it, she’s fat, she doesn’t look like everyone else, but still I keep thinking, she’s not. I like to think that no

one is ugly, at least not on the outside.  One of the things I loved about Good In Bed was how Cannie came to accept who she was, that she wasn’t this waif or super model and it was okay to be so.  In this one, she’s back to all that superficial wondering, and even though Cannie shuns the cultural manifestations of ideal beauty, it’s still a factor.  Now, maybe if I finish it, I will find that inner beauty triumphs once again, but in the meantime, as a reader, I am floundering.

So, then I tried to read something more substantial.  I started Churchill and Gandhi: The Epic Rivalry That Destroyed an Empire and Forged Our Age, because of a great review I’d read in the New York Times a few weeks back.  Heady, heady stuff.  Not an easy book to carry around to the beach or in your bag, since its weight is as heavy as its subject matter.  Ultimately though, I couldn’t get through the introduction, as its depiction of savage killings in rural India were too disturbing for me.

So then, I decided I didn’t want to read anything in hardback.  It’s too hard to cart to the beach and all. I

tried some classic literature, a novel by Willa Cather called My Antonia.  I know it’s a classic and all, but reading about farming at this time of year, and a kind of slow read at that….BORING.

So, I broke down and got the latest from David Sedaris, When You Are Engulfed in Flames.  Hardback, yes, however Sedaris has never failed to entertain me in the past.  But again, hate to say it, didn’t pull me in.  A few chuckles here and there, and yes very well-written stuff, but ultimately I feel like this is not his best game, and also some of the essays feel strangely familiar.  I kind of got the sense that I had heard some of this before, maybe on NPR or something.  I got about a third of the way through and put it down.  I’ll go back, surely, but it just wasn’t calling to me to read it.  Might be a good book to keep in the bathroom, as a lot if it seems to be short-attention-span reading.

I really feel like sometimes it is so hard just to find a good book.  If you look at the best seller lists, especially the trade paperbacks, which I like to read, most of those titles have been there like forever. Some books seem to be lucky enough to get on “the book club circuit,” and they just ride and ride for an eternity.  Nice for the authors, I am sure, but it can be very frustrating trying to find something that is new and worth reading.  Take, for example, The Memory Keeper’s Daughter, which my book club read last summer.  Still on the best seller list, simply because book clubs across the country are reading and discussing.  Personally, I thought it was just an “okay” book.  Nothing that haunted or stuck with me other than the scarring memory of some kind of tannish, near-microscopic critter crawling across a page of the copy I borrowed from the library. EEK!! Yet there it is every week, The Memory Keeper’s Daughter, taking up space on the trade fiction list, (this week it’s number 9, with 41 weeks on the list) where I want to see something new, and fresh, and really worth reading.

This month, my friends in the book club picked a book I had no interest in reading.  I don’t know…maybe because it’s summer, I just feel like light stuff, and again, not in the mood for a hardback.  The choices put forth by the person presenting the choices this month were Ken Follett’s The Pillars of the Earth, Amy Bloom’s  Away and Emily Giffin’s Love the One You’re With.  They voted for Away, and I was kind of disappointed because in the last year, I’ve read SO MUCH Jewish-heritage fiction, much of which is very 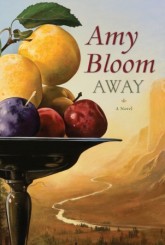 good, and the subject is certainly compelling, but I just feel like, enough for me.  A few months ago I swore off anything having to do with Jewish heritage, pogroms or World War II.  Just for a while.

So it was with a reluctance that I finally cracked the cover of Away two days ago.  (I waited for its June 24th paperback release.) And let me tell you:  It is the book I have been looking for.  Beautifully written with compelling characters, I can’t wait to get back to it at the end of the day.  In fact yesterday, while Ee was napping and the boys were playing Wii, I snuck away with the book and relaxed for a bit, rather than tending to my myriad chores.

The book tells the story of a Jewish immigrant named Lillian Leyb. Befallen by tragedy, she escapes the pogroms of Russia to make her way to 1920’s America.  She’s strong and endearing, and (according to the book jacket) she makes her way across the U.S. and back to Russia searching for the daughter she lost and assumed had died the night her family was murdered.  The language is ethereal and yet easily accessible.  So far, I am enjoying it immensely.

It is haunting, and I cannot wait to get back to it now.  It’s nice to know that feeling again.