← The Year In Pictures
Dress to Impress Day →

This year I made costumes for the boys, and I was pretty happy with the way they turned out.

Clooney went dressed as a $100 bill. For this, I cut a box apart and attached a beach towel that had the bill’s image printed on it. I used staples to attach it, and then covered the staples with duct tape. The box had some creases in it, so I fortified those with popsicle sticks to keep the cardboard straight across his back. Duct tape was also used to make straps that went over his shoulders and through the back of the costume. Then I cut the real Ben Franklin out of the towel, and dressed Clooney up as the old man.

I also painted the back, using some leftover paint samples from when we painted the house and roughly sketched a facsimile of what’s on the back of the bill to finish it off.

Edison decided that he wanted to be a penny this year. At first, I was going to use cardboard, but then it turned out that a pop-up play tent  that belonged to The Princess had broken, so we were going to throw it away. The base of it was round, made of nylon, lightweight and shaped with a wire frame. So, I got some copper spray paint, and changed the color from purple to shiny new penny. Then I got some stick-on glitter letters and copied the penny’s words. (There were no upper case letters to be had, so I had to go all lower case, but worked out fine. People knew what he was.) We got a stick-on Abe beard (which I also spray painted) and used a little face paint to recreate the coin. 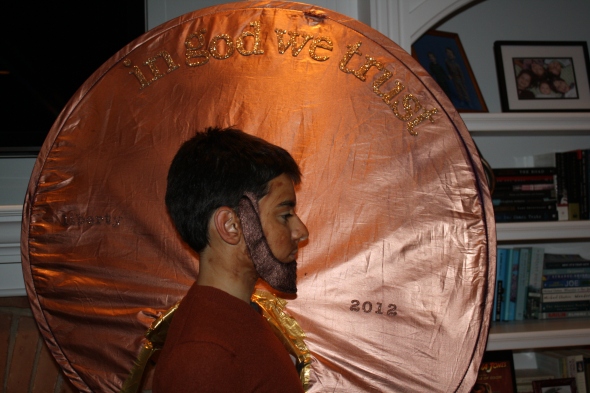 And I decorated the back as well. 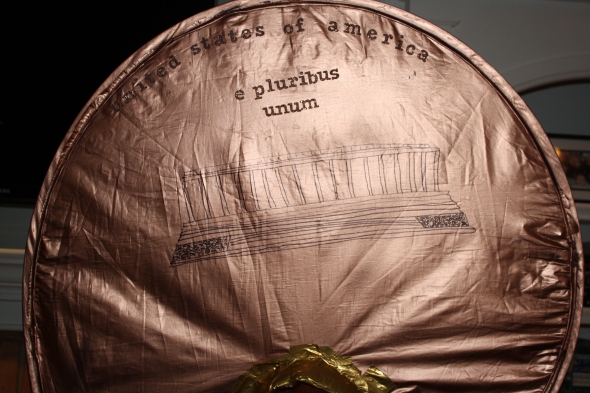 Lots of fun! Hope you had a great Halloween too.