Birds at the Feeder

I put up this feeder over the winter, and just recently caught a few birds in photos. I know the second one is a tufted titmouse, but I’m not sure about the first one. It looks like some kind of woodpecker. It had a hard time finding purchase on the feeder, hence the angle. 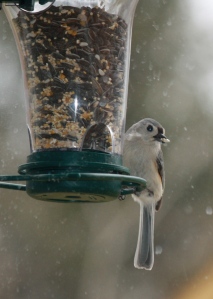 A family of robins has made a home right outside our dining room in an arborvitae tree. Today while I was taking photos, the father came and fed the chicks. There are four total, but you can only see three from this angle. 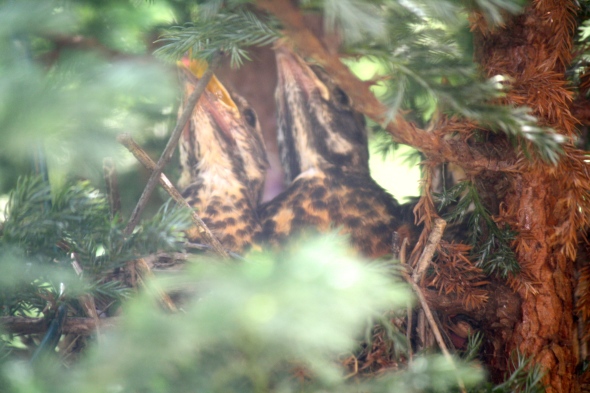 How cool would that be??

Le Frog in our pond

We have a frog who’s moved into our pond. He’s a bit of a recluse, but he’s controlling the water slider population for us.

But the kids have named Le Frog, after Jean Reneau’s character in Flushed Away.

Sadly, the Bottom’s Dropped Out of the Market for Trash

Apparently, the economy is affecting the market for recycled goods in a negative way.  Plastics and cardboard are piling up in recycle yards, and too much of what could be recycled is ending up in landfills as a result.

One step up and two steps back.

In other news, I hadn’t mentioned this before, but it turns out that our house needs a new roof.  We had a leak in the master bathroom ceiling, so I called a roofer and got the news.  Have been taking bids all week, which is fun, you know, because I just love meeting new people. (Especially when those people come over and then ask me for five figures in cash.)

Then, last night, I was going to finish off some laundry and the start knob to the dryer broke off in my hand.  Not a big deal, I mean, I’m part Macguyver, you already know that about me.  I just reached up for the pliers in the box above the dryer and started the thing without blinking twice.  Fixing that can certainly wait.

In terms of holidays, I started wrapping the extended family gifts last night.  I’m kind of a remedial-speed wrapper, so at this rate, I will just get everything done by Christmas.  Hey — when are you sending out your cards?  Mine are ready to go, but I don’t want to send them yet for fear of seeming overly zealous.

This was kind of funny:  At the kids’ school they do this “Secret Santa Shop,” and we’ve participated every year, but then, last year I was there with the kids, and I was thinking, Oh my God, what a bunch of crap.  I mean, I want to support the school and all, but I don’t want my kids thinking that you just have to get any old crap for people as a Christmas gift, you know?  Grandpop doesn’t really need, nor will he ever use a pinkie-sized screwdriver on a keychain just because it says “Grandpop” on it.

So, this year, I talked to the boys and told them not to feel badly when the rest of their class was shopping for that crap, that I would take them to Five Below and let them buy more personal and appropriate crap for their grandparents and siblings.  I took Edison, and he did pretty well.  He got a

car for Clooney, a Dora thing for The Princess, something for his dad.  He got lotion for one grandma and a cell phone cover for the other.  Then, there wasn’t anything really for the grandpops, so I just took him over to the candy  store where they sell old-fashioned candy in bulk and we got some licorice for the grandfathers.  By Christmas, it will be nice and stale, just the way my father likes it. (That’s not sarcasm, by the way.)

Manfrengensen took Clooney later that day.  He said Clooney was hilarious picking out the gifts. He wanted to buy my father something having to do with Hanna Montana, just because over the summer my father would repeat those words from time to time.  They’d gotten stuck on his tongue while the kids were watching the Disney channel. He’d just say, “Hanna Montana” for no reason like the Rain Man. So, Manfrengensen steered our son away from the teeny bopper crap and Clooney ended up buying a pack of Chuckles for Manfrengen’s father, and a pack of Tic Tacs for mine.  We thought that was pretty funny.

And it’s way better than last year’s screwdriver, which if it isn’t there already, is certainly headed for the landfill as well.

Finally an auto maker has rolled out a long-term strategy for manufacturing cars that makes sense. Nissan CEO Carlos Ghosn became my hero this week when he announced Nissan’s plan to build electric cars en masse by 2010. The first will be for governments in the US and Japan, but by 2012, they plan to market them to the public. While other auto makers are offering little more than lip service about reducing automobile emissions by 10, 20 or even 30 percent, Ghosn seems to understand that with more people driving around the globe, the goal to reduce emissions should realistically be 100 percent.

You can read that whole story here:

I went to read the NPR site this evening (they have been doing some amazing reporting from China this week) expecting to be saddened by what I read. The first thing that caught my eye though was some good news for a change.

Even if you don’t believe in global warming, how can you not think that “clean energy” is a good thing?