Two of the Greatest Things My Dad Ever Said

One time, we were down at the beach, watching Casino Royale, and the torture scene came on:

Around the 45-second mark, my dad said, “What are they trying to do? Give him hemorrhoids?”

Another time, my nephew was watching Yo Gabba Gabba:

My father, as he was just walking through the room said, “These guys are lucky to be working.”

Of course, he had myriad other great things he said, but these two just keep making me laugh.

Another reason why penmanship and spelling are so important…

Pulled this out of my second-grade daughter’s “daily” folder.

Took me a second to realize how facting hilarious it is.

It’s been a good summer. It’s been a busy summer. There was a good bit of traveling, a few camps, and lots of laughs. But you know, it’s time to return to our regularly scheduled programming. The school bus schedules arrived yesterday and every night this week there’s some event at each of their three separate schools to welcome back and introduce new teachers and friends. The long days of sleeping in, playing as many video games as Mom will allow and staying up late are drawing to a close.

I turned 49 this summer, and I don’t know if it’s this feeling like I’m on the downward slope of a roller coaster ride into 50, but I feel the need to make some changes, get a few things done. First thing is to get the house in order, just rearranging all the pieces that have just been sitting in places where they originally landed. Then I’m also getting myself in order, trying to exercise both body and mind more than I have in recent months…or years.

I started in the office, which looked like this: 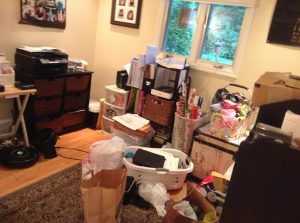 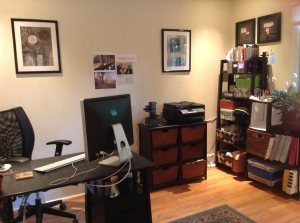 Then, yesterday, I rearranged a junk drawer in the kitchen, though there are still two more of those left. Basically, I plan to be an organizational tsunami from one end of the house to the other, hopefully finishing the whole thing before the end of September.

But mostly, I am looking forward to the quiet that the school day brings to my life, a chance when I can gather my thoughts and actually follow through on them, or use the bathroom without hearing my name called on the other side of the door. I realize that some day, too soon, this will be the whole of my life, once the kids are grown and out of here. It’s not that I don’t cherish the moments of chaos, but I do love the quiet.

This is pretty much the story of every morning, when they are talking to me about who hit whom, who’s not being fair and what kind of breakfast they want, when all I can really think about is that first cup of coffee.

Recently, my oldest child, Edison has discovered the Internet meme. I have two favorites, the “Hey Girl” Ryan Gosling meme…

and “The Most Interesting Man in the World”.

I showed them to Edison, but he didn’t really get them, so we went to Youtube to look at the Dos Equis commercials and help him get the jokes. Yes, funny, he nodded.

Last night at dinner, I put some waffle fries on the side, and Clooney, who usually eschews potatoes of any kind, exhibited a rare excitement, claiming that waffle fries were his favorite.

Manfrengensen and I were, of course, suprised by his reaction, and then Edison, who is usally quite serious, said dryly, “I don’t always eat fries, but when I do, they’re the waffle cut.”  I don’t know, just tickled me for some reason.

This week Clooney had a geography project due, and he chose to do a Power Point presentation. I’m not much of a helicopter parent, so I let them do their thing and then give it a check the night before it’s due.

Going through his slides, I noticed that he hadn’t done a lot of in-depth research. On the slide marked “EVENTS” for example, he had listed two. One was the Fête de la Musique,  which is a music festival that features free concerts from all genres, though I had to help him fill in those details. Then there was something called Marché des Fiertés, so I asked him what that was. He had no clue, claiming to have just pulled things off the Internet through Google. So I did a little research myself. Turns out that it was the Parisian Gay Pride Parade. Not that there’s anything wrong with that, but it might be easier for him to field questions from the class about the Tour de France, so I suggested that he just go with that instead.

Since many bloggers seem to be putting together this kind of list at this time of year, I thought I would offer you my contenders:

What are the beads made of anyway?

Five minutes of bliss for your daughter (who let’s face it, would have to be under the age of 8 not to want the real thing instead), five years of finding little colored balls in your carpet, under the bed, in a shoe, under the sofa, in the dog’s bowl…you get the idea.

Four hours to put together the Barbie Dream house, and the furniture stays together pretty well…as long as nobody actually plays with it. The Princess has this exact Barbie house. The furniture fell apart so many times that she just finally gave up on it. It’s just cheap (and yet not cheaply priced) Chinese-manufactured crap. Don’t even get me started on the elevator. The same goes for anything Hot Wheels related. 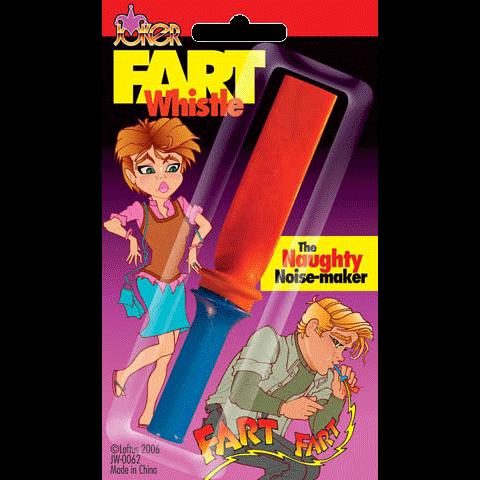 Needless to say, hours and hours of fun for the whole family. And — how old is that guy on the package supposed to be?

4. Any Kind of Voice Changing Device

Pretty much anything that makes electronic noise is annoying, but when kids can take their own voices and magnify and distort them, well, the fun never stops. At least not until you take a hammer to the thing.

5. Any Craft That is Way Beyond the Child’s Appropriate Age Level

While crafts by themselves present enough set-up/clean-up work for any parent, a craft that the child can’t actually do by him- or herself is the eighth circle of hell. Even for the most Martha-Stewarty mother.

Good luck with your holiday shopping!

Suggested titles for Pirates of the Caribbean 5

The Depps of Depravity

Pirates of the Caribbean There Done That

"You wear too much eye makeup. My sister wears too much...People think she's a whore."

Actual names of Fireworks packages in a mail-order catalog we got this week: