An uninterrupted night of sleep would be nice

Two nights ago, I heard someone come bumping down the hall around 1 am. When I opened my eyes, Clooney was standing on Manfrengensen’s side of the bed, and he was hunched over, kind of holding his stomach. My first thought was a panicked one, fearing a night like Krakatoa. He mumbled some gibberish, so I asked him to repeat it, but he couldn’t form his words.

He shook his head like he was trying to clear it, and then said, “I don’t want to see the Smurfs movie.”

Then he turned on his heel and went back to bed.

Last night, it was the Princess’s turn. When I picked her up from a playdate yesterday, she said that she had a headache, and then it turned out that she had a slight fever as well. At 4:30, she woke me up, and while I was lying down with her, she got really chatty, almost deliriously so, going on and on about her field trip to the aquarium almost two months ago; how she touched a starfish, how she saw a swordfish, guys in the shark tank wearing scuba gear, even a detailed description of a stuffed polar bear in the gift shop. By the time I got back to my bed the clock read 5:33 am.

And then, I got up at 7 to take Edison to Harry Potter Camp, which is about 45 minutes away. I have never been much of a commuter, so it’s a big deal. Roughly I am in the car three to three and a half hours each day this week, but he’s enjoying it immensely. It would be nice if we had some floo powder or he could apparate, but such is the real world of us Muggles.

When he got out of the car yesterday morning, we exchanged a moment that just made my heart feel light. You know that look, when you know there’s love there? Like the look you give your newborn child, a back-and-forth feeling of bonding that is increasingly rare as they grow up, and especially around the time when they hit puberty? It was powerful. I was on air all day from that moment.

Yesterday he had a potions class.They duel with spells, go for walks in the “Forbidden Forest”, and yesterday they met a unicorn (a pony with an ice cream cone on its head). Friday there will be a Quidditch tournament. Overall, it sounds like the staff is really creative, and it’s taking place at this school that has kind of Gothic architecture. He’s surrounded by other faithful fans like himself, and he’s having the time of his life. So for that, I can do this drive. For him.

The coughing began just after midnight as a far-away noise in the back of my sleeping mind. As I rose to consciousness, I half-thought it was The Princess. Was it The Princess? She hadn’t seemed sick during the day, in fact, all of them seemed to be getting over brief bouts of runny noses, and I had just been thinking that they were all on the mend. If I just lie here, I thought, it will stop and I can drift back to where I was.

The coughing persisted, and then came footsteps down the hall. I groggily thought The Princess was coming to climb into our bed as she has been wont to do (too often) in the past. I prepared to feel her pulling on the footboard and crawling her way up the mattress to settle in between Manfrengensen’s body and mine, her cold feet taking time to warm against my calf under the quilt. The footsteps stopped on my side of the bed, and opening the eye that was farthest from my pillow, I saw that the visitor was Clooney, not The Princess at all. He was hunched over in his striped pj’s, looking quite miserable as he mumbled something that seemed incoherent to me. Still in a groggy state, I assumed he’d had a nightmare, and made a motion for him to climb into bed (the sliver that The Princess would have carved for herself), but then he repeated his words.

Now, he’s not much of a hurler; hasn’t proven himself susceptible to stomach viruses in the past. In fact, I wouldn’t even consider him a placer in this sport that Edison has so often gone for the gold medal in. So when Clooney said, that he’d thrown up, I assumed something trivial, something he’d thought was vomit that was really nothing.

“Okay,” I said, calmly, beginning to swing my legs over to get out of bed.

And then he erupted…like Krakatoa.

I started freaking out, jumping up, and gingerly stepping tipped-toed between what had landed like spin-art on the floor, “Clooney, get to the toilet!” I said, trying not to shout, but the urgency evident in my voice. And then, I had to run after him, repeating “the toilet! Clooney!” as he ran down the hall to the one closer to his bedroom rather than just shortcutting to the master bath on other side of my bed.

Master bedroom, upstairs hallway, all over his room, hall bath. We got our son situated back in bed, after stripping everything and taking it down to the laundry. As we cleaned and cleaned and the clock struck one, I shrugged to Manfrengensen, “I guess, he’s just not experienced when it comes to throwing up?”

Manfrengensen looked up from the scrub brush he was using on the rug, and just said, “Clearly.”

Parenting: every day another surprise.

Haven’t blogged in a while. Haven’t felt any “bloggable” moments in life, I guess. It’s been busy here with sickness. It sounds like a TB ward, like the kids are communicating with each other in the language of cough. As a mom, you know, you worry. It’s a big part of the job. I’ve got that going on, plus the other day I had an epiphany about Edison. Over the last year he’s gotten these really bad headaches that make him vomit. Manfrengensen and I, being the dolts we are, have thought it was strange how he always got these headaches with a stomach virus. And then with this last one, which happened Sunday night, I saw the light. You would think that as a migraineur, I would easily recognize the symptoms in others. But you just don’t think an eight-year-old would suffer from migraines. I’m pretty sure he does though. As beautiful as he is, he’s tightly wound. He stresses about things he shouldn’t.

Like the other night, we took a walk after dinner to get ice cream. We were down at the beach, and there were some college kids playing some kind of game on their lawn, tossing coins into these little square wooden boxes. (What’s that game called?) Edison wanted to tell them that they shouldn’t play it on the lawn. Why not? I asked him. “They’re going to lose their coins,” he said. What’s he caring about their coins? Know what I’m saying? And that’s just the tip of his iceberg. In terms of Edison’s siblings, Manfrengensen and I often joke that he’s like a third parent. He worries. He sees the world in black and white. He’s an octogenarian in an eight-year-old body.

Speaking of the beach, we went to the boardwalk on Saturday, and to get there, we had to go through a toll booth. The toll taker was this skinny old man with tattoos down his arms and a long white beard. As Manfrengensen handed the man our dollar, Clooney called out from the back seat in his most Eddie Haskell tone: “Hey, Santa Claus!” Then yesterday, he reminded me of that moment and said, “Yeah he looked just like Santa. Even his tattoos were green. You know, like Christmas colors?”

I have been reading a lot, currently finishing up The Guernsey Literary and Potato Peel Pie Society, and I am also rereading Positive Discipline for Preschoolers, which has helped me a lot over the years. The Princess has been more of a challenge than the others, I think. Don’t know why that is. But as a parent, I have trouble with this age. I think that’s because, first of all, I have the blood of scores of Sicilian ancestors coursing through my veins, so I tend toward hot-tempered. But also, being a motherless mother, I have trouble identifying age-appropriate behavior in kids. (Perhaps that’s not exclusive to motherless mothers however. I just like to think that’s why I do it.) Positive Discipline helps me a lot with that. I highly recommend it if you’ve got a little one and feel challenged.

Anyway, last night was tough. I finally got Clooney and The Princess to the doctor yesterday. The doctors never want to see them until they’ve been coughing for more than a week or had fever for more than three days. I can’t blame them. Nine times out of ten these things are caused by viruses and there’s nothing they can do. But yesterday, enough already. Clooney had had a low-grade fever for a few days, and The Princess was running 101-102.5, so I took them. Got them both hooked up with antibiotics and a steroid for the cough. Clooney is prone to respiratory illnesses for some reason. I was a little worried about the steroid, as he’s also prone to bouncing off the walls, but he didn’t. His fever actually spiked in the afternoon, so he was kind of listless, just on the couch watching Ni Hao, Kai Lan all day.

The Princess had a coughing fit at bedtime that kept her awake and then made her vomit. So at ten o’clock we had her in the shower and taking a steam. The joys of parenting…

The funny thing was that this morning, I had planned to keep Clooney home, but he popped out of bed and begged me to let him to go to school. I don’t know if that is a testament to what a great school he goes to or how nerdy our kids can be.

On Another Note Entirely

As I mentioned months ago, I was kind of looking forward to Terminator Salvation, thinking we could sneak away this weekend to see it while my parents watched the kids. But according to Rotten Tomatoes today, the reviews are running positively at only 35%. I mentioned my disappointment to Manfrengensen last night, to which he gave me a one word response: “McG.”

Yes, what was I thinking? McG. I think Manfrengensen said it best when he reminded me that McG is like the poor man’s Michael Bay, and hey, that’s not a good thing for anyone. 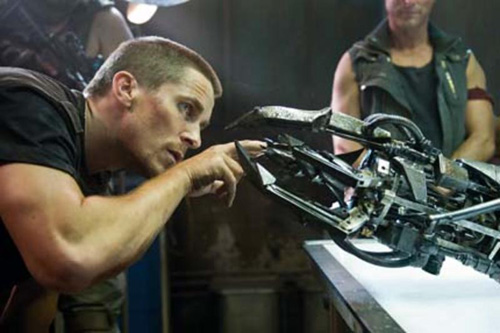