Okay, we have begun a remodel of our master bath shower stall.  When we moved in four years ago, we redid all the bathrooms and the kitchen.  The shower tile in the master bath was

this Carol-Brady-straight-from-the-seventies olive green, like split-pea-soup green, gross green, had-to-go-immediately green, but the cost of tile at the time, in addition to all the other expenses we were incurring, made my head spin.  We had a budget, a number Manfrengensen had given me to spend, and of course, I was exceeding it by leaps and bounds.

So, when it came to the tile, I skimped.  Instead of replacing the tile, I had it painted with an acrylic enamel, a nice white finish that at first looked nice and clean.  But it didn’t stay that way.  It needed a lot of upkeep if I wanted to keep using gentle cleaners, but I had kids, and I wasn’t always able to clean it frequently enough.  It got stained.  I tried to use cleaners with bleach, and it chipped.  And chipped, until I couldn’t stand that Carol Brady color peeking at me through the floors and walls any longer.

A few weeks ago, I got the tile guy in here. His name is Darius.  He’s from Poland.  Nice guy, though with the language barrier, a little hard to read.  On the phone, there are lots of kind of awkward silences, and he leaves me with the feeling that I’m getting on his nerves.  Like he’s 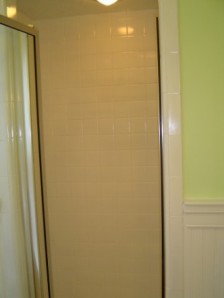 pulling a “Costnanza.” You know that episode of Seinfeld where George tries to make everyone think he’s busy by acting annoyed when interrupted?  That’s Darius on the phone. He’s probably not as aloof as I take him. In fact, the silences are probably just the moments he takes to translate my English into the Polish of his mind. He’s presents as a person of few words, and I do not. In fact, I often go too far in the other direction, especially when there are awkward silences, especially when I am trying to determine whether my point is being taken, and then even when I know it is, I tend to press further.  Something Manfrengen loves to needle me about.  And who can blame him?  Also in person, when Darius and I are discussing something, and he smiles, I don’t get the feeling I’ve amused him as much as he is thinking, Silly American Girl.

But he’s nice, and I trust him.  He works a lot for my dad, who specializes in historic reconstruction.  My house is old, built in the late 19th Century. Before we moved in, it was last renovated in the Seventies, hence the Carol-Brady olive.  The door to the shower is small, with two 8-inch walls on either side of it.  The walls are also decorated with beadboard on the bottom half.

So, after Darius had been here, measured, and given us his quote, which was so reasonable that I questioned why we hadn’t done real tile in the first place, I got it in my mind to mess with the universe.  I got to thinking…what if we opened up the entrance to

the shower?  What if we took off those 16-inches of wall on either side, and made that all glass shower door?  Darius was hesitant.  He could do it, he said, but “better if you get carpenter.”  Better? How better? I asked, what did he mean better?  “Just better,” was his cryptic answer.

He got here this morning to tear out the old shower.  Five minutes later, he came downstairs to tell me I needed a carpenter.  The walls have too much carpentry work on them, and he fears collateral damage.  I understand.  It puts my shower project back a week with scheduling the carpenter, and I’m disappointed.  But I understand.

A Brush With Celebrity

Manfrengensen and I just got back from four days in Palm Beach, which were fabulous.  The ocean was so clear, I could see my feet.  Saturday the waves were too calm, so calm it was like swimming in a lake, but other than that, everything was fabulous.  We got the sun.  My skin is the color I like it to be, which means that it is browner than my winter look.  My winter skin is something near the color of a newborn rodent.

We also got an upgrade to the concierge level, which was awesome.  All day long they serve treats in the common area.  There are drinks and water and everything.  One day when we were coming from the beach, there was a woman talking to the concierge at his desk. She was small, and even without make-up, or minimal make-up, she was beautiful, glamourous, sparkly. After she got on the elevator, I said to Manfrengensen, “Was that Susan Lucci?”  almost

as a joke.  It couldn’t be she, after all.  But the concierge chimed in from across the room (how he had heard me was amazing, like he must have spidey-senses or something), “YES! It was Susan Lucci.  She stays here all the time.”

So, how about that?  Susan Lucci.  And then she was everywhere.  She seemed really nice.  She spoke so sweetly to the concierge, like they were old friends.  I don’t know how old she is, but let me tell you — she looked good for any age.

Funny thing — so, yesterday, I was sitting alone behind the concierge having breakfast.  Manfrengensen was sleeping in the room, and I didn’t want to disturb him.  So, you know how celebrities use pseudonyms at hotels, I guess so their fans or paparazzi won’t disturb them?  Well, Ms. Lucci was speaking to the concierge, and then she got on the elevator and disappeared.  He got on the phone to order her a private cabana for the day.  He said in his French accent, “I know you don’t usually take reservations, but this is for Madame Vuvent.”  (or whatever her alias was, I overheard to some extent, but unlike the concierge, I don’t have the spidey senses)  The person on the other end of the phone must have asked, “Who?”  So he repeated the alias name.  Again, nothing on the other end, so he said, “Susan Lucci!”  Oh, oh, the other person must have said, okay then.

I don’t know, I just thought that was kind of funny.